The Backbone: The Role of the Armed Forces in the Resistance Movement
Mareks Runts

Estonia, Latvia, and Lithuania are all located in a potential conflict zone with Russia. Following the Russia-Ukraine conflict in 2014, the sensitive location of the Baltic states became an even more topical issue. It is even more critical now after the 2022 Russian aggression against Ukraine and the Russia`s statement of intent toward former Soviet territories. The 2014 Russian intervention in Ukraine highlighted the importance of total defense in NATO and the Baltic states, resulting in the development of the Comprehensive Defense concept, which includes the whole-of-society resistance to the occupying forces (NSHQ, 2020).
This article examines the role of armed forces in support of the resistance movement from a small state perspective. Within the scope of this article, the general term ‘armed forces’ refers to both regular forces and territorial or home guard forces. The integration of the armed forces into the resistance movement will be analyzed by looking at the historical experience of the Latvian Forest Brothers and the traditional development phases of the resistance movement. From a small state perspective, where defense needs to be organized with limited human and material resources, it is essential to integrate the armed forces and the civilian sector. Therefore, the armed forces must form the backbone of the armed resistance, which integrates the other security forces and the civilian population into the national level resistance movement.

The role of the armed forces in resistance movements is determined by dynamics of phasing and timing. History has shown that successful resistance movements develop and grow through specific processes that can be divided into three phases. The initial phase is Latent or Incipient insurgency. During this phase, the foundation is created for future successful operations. It involves establishing the organization, developing internal and external support mechanisms, and ensuring popular support for the resistance. Violent activities are limited during this phase. The second phase is that of Guerrilla Warfare. Open guerrilla operations are executed, and activities in the information space support them. The resistance movement openly challenges the established authority. The final phase is Mobile Warfare or the War of Movement. This phase starts the transition from guerrilla warfare to conventional warfare. The guerrilla force transforms into a military organization, and the resistance movement establishes a civil administration. At the end of the phase, occupying power is expelled (US Army 2003). From the Baltic countries' perspective, these phases are still relevant with some modifications and a modified sequencing.
First, to successfully prepare for a possible occupation scenario and be ready to conduct armed resistance, the Baltic states must carry out a Latent or Incipient phase in peacetime. This means that all necessary steps are taken to allow the resistance movement to be initiated in the event of occupation. The most significant difference from the classical phases of resistance movement development is no violent activity. The only thing that needs to be considered in greater detail before initiating any activity is the potential risk of compromising sensitive elements of a resistance organization. During this phase, armed forces are responsible for training, planning, and preparing the environment for guerrilla warfare.
The training audience would be divided into internal and external categories. During internal training, the armed forces are trained in the theory, tactics, techniques, and procedures (TTTPs) of guerrilla warfare and resistance. For example, the Latvian National Defence Academy (LNDA) curriculum includes an Unconventional Warfare course. Since 2014, every officer who graduates from LNDA has been educated and trained in TTTPs of guerrilla warfare and resistance (Latvijas Nacionālā aizsardzības akadēmija, 2021) . An external training audience includes personnel from other services, like first responders, police, border guards, and members of the civilian population. According to their planned role in the resistance movement, they all must be trained in TTTPs of guerrilla warfare and resistance (Fiala, 2020; NSHQ, 2020). In the planning and preparing process, the armed forces design and develop a guerrilla warfare campaign to support the national resistance movement in case of occupation of the country (Aizsardzības ministrija, 2020). The history of the Baltic states and the experience of the Latvian Forest Brothers have shown that forming armed resistance is much more challenging to do once the occupation has taken place. 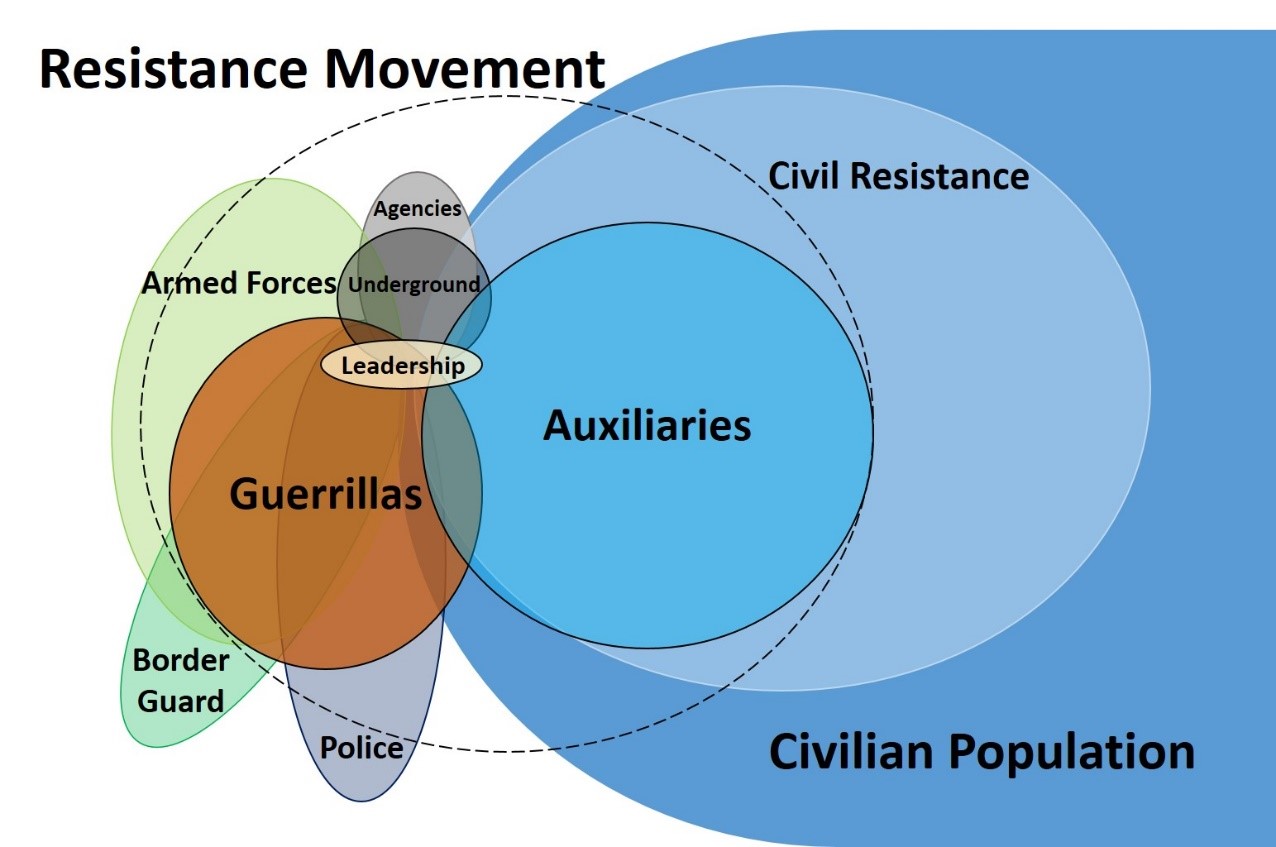 Figure 1. Integration of security forces, agencies, and civilian population into classical elements of resistance movement: leadership, underground, guerrillas, and auxiliaries. (Source: Author’s own)
Unlike the classic development phases, the Mobile Warfare or War of Movement phase starts when an armed invasion occurs. The armed forces conduct conventional defense operations (Aizsardzības ministrija, 2020). The transition to the Guerrilla Warfare phase occurs when the conventional defense is no longer possible due to the opponent's superiority, or a decision is made to stop it because it is not tenable to continue due to losses in personnel or materiel resources. This is exactly what happened in the historical case of the Latvian Forest Brothers, and they started Guerrilla Warfare immediately after the collapse of the conventional defense.
The Guerrilla Warfare phase begins with large-scale guerrilla operations, and when combat conditions change, it continues with limited guerrilla operations. Large-scale guerrilla operations are primarily about the intensity of operations rather than the size of the operations, which means attacks by many small units on adversary forces. In the initial stages of invasion, an adversary focuses on seizing key terrain, and forces are concentrated along the main axis of advance. Therefore, guerrilla units have room for maneuver, which they use to carry out large-scale operations utilizing small unit tactics. Guerrilla units are a hybrid force that include armed forces soldiers, other services personnel, and members of the civilian population. Officers of the armed forces and non-commissioned officers assume leadership roles for the guerrilla forces. When the adversary begins reinforcing its control over terrain and population by conducting rear area operations, guerrilla units are forced to conduct limited guerrilla operations (Runts, 2014). The adversary's rear area operations include establishing local pro-occupation administrations and militias, conducting mass arrests and media censorship, and introducing movement restrictions by curfews, road checkpoints, and special control measures (Wasielewski, 2021). Guerrilla freedom of maneuver is limited, but it is sufficient to continue operations because the adversary is concentrated on controlling the key terrain. During the Guerrilla Warfare phase, the armed forces act as a backbone around which fighting forces for armed resistance can be built. The armed forces are the most relevant to this role, as there is an existing organization with trained personnel, equipment, and command and control capabilities.
Next, if occupation continues, the resistance movement should be prepared to move back to the Latent or Incipient phase and switch to protracted resistance. The resistance movement is forced to change organizational and operational patterns when military operations are over and the adversary has gained control over terrain and population. The occupying power organizes political processes to gain legitimacy both locally and internationally. Opponent counter-intelligence agencies remain very active in detecting and counteracting possible resistance elements. Resistance movements can conduct operations only in very small teams or by individuals. From the classical organization of the resistance movement, the underground element can work most efficiently in these conditions. During this phase, emphasis is on sabotage activities and information operations. In addition, each area or sector might have different phases, and they may not occur sequentially.
It is important to note that the resistance movement must be ready to support an operation by NATO or coalition forces to reclaim the occupied territory in any phase. It means switching from comprehensive defense to collective defense. For example, according to the Latvian National Defense Concept, comprehensive defense is whole-of-government and whole-of-society resilience and activities in support of the National Armed Forces to defend the country. In contrast, the collective defense references NATO’s Article 5 obligations in conjunction with the activation of NATO response plans (Aizsardzības ministrija, 2020). Depending on the current phase, the resistance movement can support the NATO counteroffensive by conducting large-scale guerrilla operations, or it could include only limited sabotage activities. However, regardless of resistance movement capacity, a NATO counteroffensive means the culmination of resistance operations.

The geography, demography, and the potential adversary of the Baltic states require a modified approach to resistance building. As a result, the role of the armed forces is uncharacteristic of standard practice. The main objective of armed forces-led guerrilla warfare campaign is to prevent the adversary from gaining ground and support the alliance's counteroffensive. In his rules for guerrilla warfare, Mao Tse-tung argued that the basic ingredients of the revolutionary war were space, time, and will. He was ‘trading space for time and cities for man’ (Katzenbach and Hanrahan, 1955, p. 333). However, a small country cannot concede space, so it must fight for space in order to gain time. The environment of the Baltic states does not offer the strategic depth to hide in wait for the right conditions to start resistance. The only way to gain time is to carry out armed resistance from the first moments of occupation. Armed resistance and guerrilla warfare are the ways in which to continue fighting and to achieve the desired end state – the liberation of occupied territory. The backbone is a central support structure, and the armed forces should play a central support structure role for the resistance movement.

This work is licensed under the Creative Commons Attribution 4.0 International License.