Since the 1990s, the Belarusian identity has undergone several notable transformations. One of the most recent transformative periods took place from 2014 to 2020, when Belarus’ state authorities revisited official discourse on national identity elements, particularly the Belarusian language following the rise of new hybrid challenges. By changing their discursive practices, state officials, civil society, and private business simultaneously undertook a series of practical processes targeting Belarusian language and statehood narratives. The mass protests of 2020, followed by unprecedented repression, not only altered the preceding processes, but also signalled the start of a new stage in Belarusian identity development, with the shifting tempo and transformation of identity narratives and practices. From the perspective of ontological security, this article has identified and assessed the contemporary identity-building processes in the domains of language and history, arguing that past and current identity-building practices allowed by the authorities have been primarily driven by ontological anxiety.

1. The Rise of Ontological Insecurity in 2014 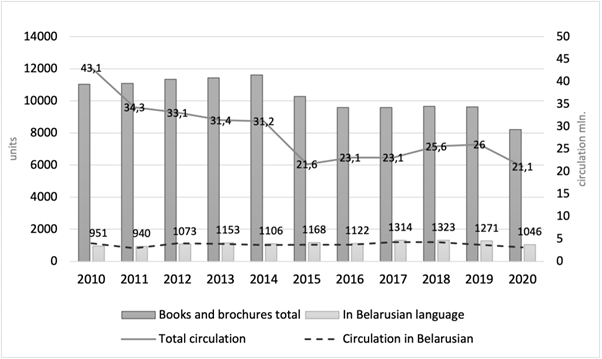 The white-red-white flag and Pahonia coat of arms – the historical symbols of the BNR – have acted as the distinguishing mark of Lukashenka’s opponents long before the 2020 when they became the dominant symbol of the protest. Before dwelling on the regime’s crusade against these symbols, it is important to outline how they were previously perceived. Before spring and summer 2020, interviewed politicians, who often displayed white-red-white symbols, argued that society in recent years stopped seeing these symbols as an opposition symbol. At the same time, a number of shops in Minsk and the surrounding began selling products such as cups, t-shirts, flags with the Pahonia coat of arms and white-red-white ornaments, which grew into medium-size businesses that generated substantial revenues. Even though the owners of these businesses often were former activists or opposition representatives, the authorities, still allowed these businesses to operate as long as they did not start selling products that could be construed as too political or against the regime. A clear example of a political line that was crossed was by the shop Symbal.by, which produced ‘Psicho3%’ T-shirts, referencing to one of the memes of the 2020 campaign. Soon after the appearance of such products, the shop was raided, and customers were detained, leading to the closure of the shop. Similarly, nearly all cultural organisations that promoted these symbols, as well as numerous other shops, were closed and liquidated by 2021 (FIDH 2021).
Post-election protests marked the unprecedented rise of white-red-white symbols, potentially changing the meaning of the symbol back from historical to political. Though protesters initially used various symbols and flags, including the official red-green flag, they gradually began to use primarily white-red-white flags and the accompanying colours. The popularity of this anti-government symbol took a clear political meaning, with citizens opposing the government manifesting it in different forms and shapes throughout the city. The white-red combination was widely used for ribbons, paintings, and other art, becoming a distinctive symbol of the peaceful protest movement against the fraud and violence of the regime.
The authorities facilitated two processes that ultimately led to the further politicisation of the symbols and emergence of deep societal cleavages. The unprecedented violence and repression, coupled with fierce governmental efforts to display the red-green state flag, resulted in more controversy related to that symbol, including support for Lukashenka becoming associated with the red-green flag. Simultaneously, the government made the white-red-white a target in its disinformation campaign, later labelling this flag as ‘extremist’ or ‘fascist’ (REFORM.by, 2020) and making it a valid reason for the prosecution of individuals and organisations. The Lukashenka government’s war against this symbol reached unprecedented levels, as substantial administrative resources were invested not only to arrest people for wearing or displaying these colours, but also to eliminate any public display of this colour combination, even when they appeared for clearly apolitical reasons, such as markings for industrial objects.
Along with stronger consolidation, new bonds and initiatives that unite Belarusians, the protesters, victims of state repression, and other social groups have appeared. White-red-white crowds of hundreds of thousands of Belarusians demonstrating explicit peacefulness against the regime of violence and torture reinforced national stereotyping, namely seeing Belarusians as extremely peaceful people. Most importantly, this national unity created a visual bond of solidarity and pride, along with international solidarity and recognition of Belarusian society’s democratic aspirations. The traumatic experience of tens of thousands of Belarusians (according to available statistics, at least 40,000 people have been subjected to state repression at the time of writing this article) in detention centres, such as Akrestina, and during the marches, became a traumatic focal point in the overall narrative that has shaped and will shape people’s further identity in their relation to the Lukashenka government and official law enforcement. The consolidation that took the form of massive protests that arose as a result of excessive violence and torture used against the protesters has continued to distinguish those who suffered and continue to suffer state repression in various forms of how this trauma manifests, also reaching Belarusians who were not directly affected by the repression through massive imagery recorded by witnesses that spread all over the country. In addition, hundreds of thousands of Belarusians had to the country after the 2020 events: Poland and Lithuania alone issued more than 110,000 visas to Belarusians in the following year (Радыё Свабода, 2021), and those who emigrated continue to promote identity narratives and symbols that united them in 2020, continuing the identity narrative construction processes from exile.
The absence of any signs of the authorities’ willingness to re-engage and termination of efforts to imitate re-rapprochement or dialogue with the part of the society that has been opposing their rule, combined with massive propaganda campaigns, the official drive to label dissident voices as ‘extremist’, and a growing list of political prisoners and political verdicts – all creates even deeper divisions in the society. This situation serves as evidence that the regime focused on reassuring its own ontological security exclusively within the group of their supporters, retooling its previous practices and excluding the society groups that the previous identity practices might have appealed to. The continuing repression, coupled with a return to particularly harsh anti-Western rhetoric and full-scale reliance on Russia, suggests that the authorities reversed the course of ensuring their ontological security, focusing on specific groups of their supporters, having lost the hope to construct all-encompassing narratives and practices as they attempted to do before 2020.

Before delving into the most recent identity practises in Belarus in relation to language and history in years 2020-2021, it is essential to consider the processes that preceded the mass protests of 2020. The analysis of identity-building social practises in 2014-2019 revealed that the major practical changes in terms of Belarusian identity construction occurred before 2020, rejecting the notion that the Belarusian nation was born ‘overnight’ in August 2020, and suggesting that current manifestations of national identity are continuations of practises that occurred before 2020.
Along with discursive changes around the presentation of the Belarusian language before 2020, a reshaped understanding of the Belarusian statehood and nation’s longevity was observed, with an emphasis on pre-Soviet periods, particularly the GDL, paired with a modification of rituals and practices around the period of the Second World War. Though the status of the Belarusian language in the official discourse was elevated, efforts to broaden its use in practice were limited to rather ‘soft’ actions, while the central role on this account was taken by civil society. Before 2020, the Belarusian authorities allowed, and in some cases even facilitated, a number of practical developments from the civil society that contributed to building a distinct pro-Belarusian identity. From the perspective of OST, which argues that protecting the identity and the ‘self’ could be as important as physical security, this policy could be explained by the regime’s desire to confront the potential new type of hybrid threats on the state level, and by doing so to secure its own personal rule on the individual-group level.
To increase the distinctiveness of identity by engaging in the reconstruction of elements of Belarusian language and history in how they pertain to identity, the authorities took irrational steps – they modest irritated of their ally, Russia and facilitated a growth of importance of the non-governmental sector. By making these measurable ‘sacrifices’, the regime hoped to assuage concerns related to ontological security and at the same time to solidify its own rule, as inaction in the face of emerging hybrid threats and regional disturbances could result in greater losses in the form of potential enemies threatening physical security. As a result, the authorities have chosen a ‘lesser evil’ and attempted to find a win-win situation by doing what they have done for decades – balancing. This approach, coupled with the targeted and ‘soft’ nature of the discussed changes, also signals that the government’s intentions were driven by rational calculations rather by values. Simultaneously, empirical data show elements of Belarusian national identity have been evolving without government interference, therefore, the authorities were legitimately concerned that their previously promoted narratives and practises may no longer fit contemporary society, and thus they will not ensure their group’s ontological continuity.
Within the regime, ontological anxiety transformed into insecurity at least twice between 2014 and 2020. The first time was when the authorities needed to re-establish their ontological being in the contemporary society to appease group anxiety and Russian aggression could have threatened state-level security (including personal rule), and the second time was when the 2020 protests emerged. The authorities’ search for the ‘self’ in a changing society has largely failed, especially in light of the way the authorities reacted to 2020 events. The popularity of identity-building practises facilitated by civil society organisations and private businesses around the popularisation of the Belarusian language and certain historical periods, as well as the rise of the white-red-white symbols even before the 2020 events, shows that these ideas were supported among citizens with an increasing capacity and role for civil society and private initiative in the country. This may have contributed not only to the strengthening of Belarus’s distinct identity, but also to the consolidation of Belarusian society prior to 2020 protests. Lukashenka’s violent response to the 2020 protests hastened the ongoing identity consolidation processes and alter their trajectory by increasing the subjective closeness and solidarity of the nation.
The 2020 events alter many aspects of identity and had an impact on identity-building practises. First and foremost, the white-red-white symbol became the political symbol uniting and distinguishing the protesters from the government supporters, whom the authorities try to mobilise and distinguish on their end, realising the threat of consolidated society to autocratic rule and re-creating a cleavage in society as their new response to internal insecurity. In terms of the Belarusian language, some of the previous initiatives have continued, but the main drivers of Belarusian language promotion – civil society groups – have been subjected to repression and liquidation, as have hundreds of other non-governmental organizations in the country. Despite this disruption, Belarusian identity narratives continue to develop, including on the basis of elevated existing and new meanings that emerged in 2020, such as more sound international recognition of Belarusian democratic aspirations, new sources for national pride, shared recent traumas, and ongoing state repression. All of these factors and processes continue to affect societal groups and their identities, with consequences of these processes to come.